A film from the video archive of the Opéra de Lille: PREMIERE EVENING

"The control tower – a kind of lightning rod – will be in the middle of the stage, vertical, technical, emitting images, audible signals, inhabited by musicians as if they have sought refuge during the deluge.
The fragments of an enormous “bubble” like pieces of an egg shell will surround the action – screens on which images of the actors, musicians etc. will be projected but also images of the deformed “world”, transformed by music. The singers–actors, like virtual images, will perform ellipses around this central tower like planets around the sun, captured from time to time by hidden cameras. Storm in the minds, in the texts, in the music, between instruments / voices / electronic sounds that write and delete alternately like a huge respiration. Building – recounting then disrupting – erasing. Like a story being started over and over again.
The body of the spectacle damaged by internal disruptions. Moby Dick, King Lear, The Lightning-Rod Man are simply allegories of the mental storm that is tearing apart the text and the spectacle from the inside.
Immobile storms too. A kind of novelty of our century. Vertical storms – semi-calm – much more terrifying than thunder over the countryside.
Peter Szendy’s text "Le texte-Léviathan - Melville, la lecture et la prophétie" will run right through this opera, a kind of basso continuo, generating the possibility of lightning speeds, of digressions. The “Storm” too like an ultimate sweeping away of all customary practices – like the destruction of the established order, ebb and flow starting over and over again as the final words of Peter Szendy’s text puts it so well: “The text contains its promise of writing which in turn contains the text as a prophecy to be fulfilled. The writing is only prophetic in this recommencement when it truly commences. Reading will be like this too in the re-reading. There is nothing more to verify or predict. Everything has been, everything has taken place. And everything can be re-written or re-read, precisely because everything has already been produced. So there’s everything left to say. To tell. I’m listening to you, now it’s over to you.”
Notes on the text by Peter Szendy - November 2003

"Like Scheherazade, for whom the future depended on the pursuit of stories, a voice – the narrator’s – speaks to you.

This voice does not make up the fictions it is using for conversing with you and retaining you: it deflects them, borrows them (mostly from Herman Melville) and offers a never-ending commentary on them. It keeps on about glosses to them which all revolve around reading, the act of reading like the overture to a prophecy or future promise, like the exposition to an event that is improbable, unforeseeable and cannot be read in advance, the character of which is the storm and its many different forms (thunderstorm, cyclone and deluge).
Amongst the fragments read, interpreted and translated by this voice, two stories by Melville form the common themes that end up confused, calling out to each other and becoming interwoven: the short story entitled The Lightning-Rod Man and the great novel Moby Dick.
In the short story, the person speaking and saying “I” secretes not only the text of the unfolding storm but also, at the heart of it, an intrusive focus that flows back towards it, putting it outside of itself: flushed out in the deluge. From the novel, on the other hand, come countless scenes that represent reading and writing as being adrift, having lost anchorage and being torn apart, paradoxically fulfilling predictions and omens while shattering every expected horizon.
Carried along by these two themes, the people inhabiting the texts – strange and disturbing characters for the most part – cross paths and answer each other in echo: the guest and the intruder of the short story; Ahab, the novel’s mutilated protagonist; prophets of all kinds (Elijah, Gabriel, Jonah...); kings (Lear, George III); but also Noah, Benjamin Franklin, the witches of Salem... They were connected to each other in this obsession linking them from afar: prophecy, divination, and premonition.
To the point where with everything having already happened, there is nothing else to verify, the event seems to have a clear field: it begins again, as if the text infinitely being kept on about and glossed (whale-text or leviathan-text) had allowed a bubble to escape where what is being produced is replication, i.e. unprecedented." 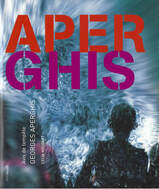 Célia Houdart and Georges Aperghis set out here to tell the story of its genesis, by summoning the sumptuous images projected during the show. The author and his interpreters explain step by step the stages of their creation. Thus, a striking and warm personality of contemporary music proves to be an extraordinary pedagogue.
Click HERE to discover the complete text of the opera
Copyright photos Mikaël Libert